Apart from the many advantages of testing during design, perhaps the most important is to test implementation of new technologies for which an ecosystem does not yet exist. Read on to find out how 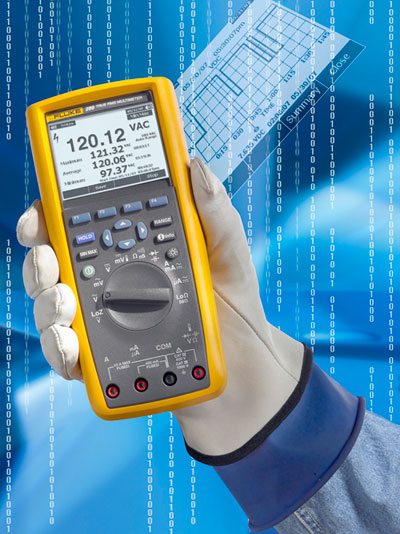 Testing during design helps in verification of sub-system level design, which permits fine-tuning to meet the system specification requirements. The designs that are tested during this stage are of individual parts of a final product, which means that they would be missing criticial functionality that is required to make the system operable. This makes it important to simulate the other sub-components which are not yet available.

Alternatively, one could test subsets of functionality of the larger system that may be working at a given point in time, but not necessarily with all the functionality of the end product. “In industries like automotive and aerospace, where the end product is a complex system of systems, the ability to test subsystems through hardware-in-the-loop testing is a critical method to shorten the overall development cycle,” explains Raviteja Chivukula, Technical Marketing Engineer, National Instruments.

How it is different from testing after design
Testing is done during the design process by the design engineers themselves. Here, their focus is to ensure that the electronics system design works in the real world just as it did on paper. They would typically be debugging the product to ensure that the intended functions are implemented one way or the other, and then optimise those features correctly.

On the other hand, testing after design is more focused on ensuring that the product has met the design specifications that were set by the customer.

Stephen Hire, general manager, Aeroflex Systems Pvt Ltd, says, “From an R&D perspective, testing during design entails two very different objectives for the two approaches. Testing during design is about enabling the engineer to make a design work, then debug it and finally optimise it. Testing after design is usually more concerned with proving that the design has met its design specifications.”

How to successfully apply this methodology
The main point to understand and keep in mind is that the device under test (DUT) here is still not a complete system as it lacks many features. This requires the testing to be done in such a way that only certain parts of the system are considered, failing which the test would also invariably fail. 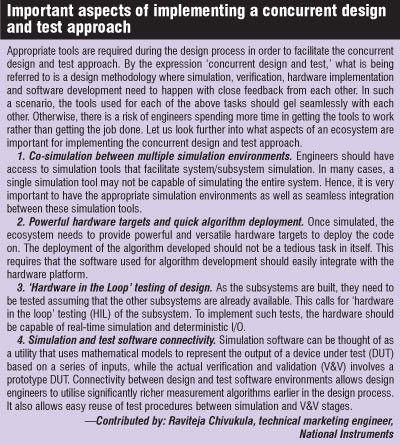 “The most optimal way to bring out issues is by doing unit testing of all the modules which go into a larger system. When systems get integrated, there is always a possibility of one corner case being missed, which is not handled properly during system level testing,” explains Amit Sinha, CEO, Dexcel Electronics Designs.

From a functionality perspective, many things in the product might not be working. The goal is to plan testing to achieve measurement objectives when the system is not yet exhibiting high levels of functionality. A spokesman from Teledyne Lecroy adds, “One aspect of this challenge is to have a good idea of the system’s partitioning, whether in terms of subsystems or subsets of functionality that may involve multiple subsystems. Yet another aspect is to have an understanding of what the capabilities of the subsystem or subset should be, and devise a test to verify that functionality.”

This can be explained by looking at cellular base stations as an example. During the earlier stages of a new technology’s evolution, such as in the case of LTE-Advanced, there are no mobiles available that use the technology. “This requires design engineers to use test equipment as a test peer to help them make sure that the base station is correctly implementing LTE-A protocols and test features such as carrier aggregation,” explains Stephen Hire. As the design progresses, they will then use the test mobile to help them debug any issues and to help optimise critical performance elements such as scheduling algorithms and data throughput.

Once the design phase is completed and the prototype base station is ready, it will usually be handed over to a different group for conformance testing to ensure that the base station meets all of the relevant 3GPP standards—this latter stage can be considered as ‘design after testing.’ Another aspect of testing after design comes in whenever a new version of software is released. For most commercial products, there is usually a lot of regression testing to ensure that all the features from earlier versions of software still work correctly with the latest version.

This design methodology involves product design happening hand-in-hand with test benches for the product. “In the automotive and aerospace industries, it has been practised with varying degrees of success in the form of the V-diagram model. While the use of concurrent design and test processes such as the V-diagram is common and obvious in these industries, adoption of these practices is growing in other industries and for other types of devices as well. For example, in the semiconductor and consumer electronics industries, shorter product lifespans and increasing product complexity continually drive pressure to reduce product development time by adopting the ‘test while design’ strategy,” explains Chivukula.

Build This Electronic Toy For A Child

Half Of The Enterprises Will Be Operating In A Hybrid Multicloud Environment By 2021: IDC