All electronic devices have the potential to emit electromagnetic fields. In order to bring your product to market, you need to ensure it clears a set of EMC tests. Let us find out some facts about these tests and how to build a test kit for it

Electromagnetic compatibility (EMC) testing, also referred to as EMC immunity testing, has become an important part of product design all over the world. Electronic equipment should meet certain mandatory EMC immunity criteria to be eligible for use in most countries. This ensures that the equipment will operate well when working in its intended application. Satisfying EMI/EMC safety standards, according to correct regulations, at design stage of the product can help pass the tests in one shot. 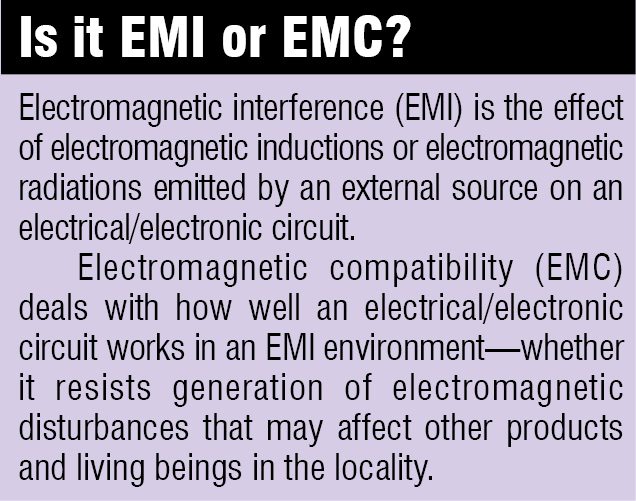 Let’s start with a quick primer on EMC testing before moving on to selecting equipment for it. There are two types of emissions that are tested: conducted emissions (CE) and radiated emissions (RE).

CE test determines the radiations propagated along connectors and cables, causing noise in the system. A designer needs to check the susceptibility by choosing proper filters in conduction path. Emissions of all equipment need to be arrested, ensuring there are no disturbances to other equipment running on the same connectors and cables.

How standards decide your equipment
Different types of equipment have different needs depending on factors like (a) operating environment (military equipment are used in harsh environments compared to consumer electronics), (b) reliability (medical devices that monitor vital signs should be more reliable than a personal computer), and (c) safety (if the operator has to be near the equipment, the radiation levels should be low). On the basis of these, the designer has to consider which specific industrial or military (MIL) safety standards should be fulfilled. However, simply knowing that you need to test for a specific industrial standard is not good enough.

Manufacturers of electronic equipment, unfortunately, have a big issue to face: These standards do not remain the same. They evolve to keep up with the pace and a requirement of modern technology on a continual basis. Some of these changes might be relatively minor, while others are withdrawn or completely re-written and superseded. It is important to keep up with all these changes and timelines for making sure a product reaches the market.

Why this trouble? The goal of the changing standards is to make the equipment become least intrusive for other devices, and more immune to hostile electromagnetic environment. 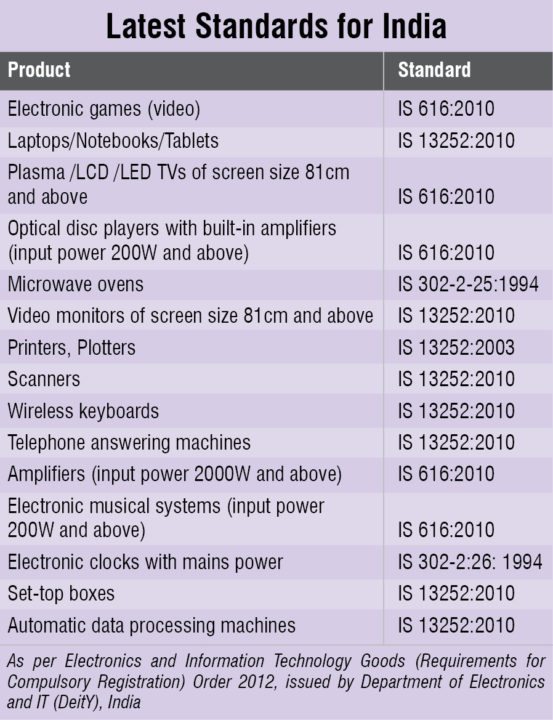 One issue is the increase in number of electronic devices that use advanced semiconductors. Electronic products are tending towards becoming more non-linear. The direct effect of this trend is seen as increased corruption of AC mains, which is a shared public utility.

Another problem faced is when previously discrete technologies converge in a single product. One example is the case of multimedia equipment for which a previously separate CISPR 32 standard was introduced. In order to maintain safety and best performance, the standards should be rewritten or replaced accordingly.

Keeping up with changing standards
Designers, test labs and test equipment manufacturers should be very well aware of, and up-to-date, with the changing technology and standards.

Test equipment users must be familiar with the equipment provided by the vendors and their limitations. It is best to buy an instrument that offers programmability for test parameters. This helps you adjust the testing process to minor revisions of standards. Programmability also serves some customised, non-standard requirements that the customers would have adopted to make their products more reliable in a typical operating environment.

Test facility vendors may have to strengthen their equipment as per standards for the safety requirements. Most of the required upgrades would be with respect to sensitivity of the antennae, range of antennae, software updates of the test equipment and periodical calibrations.